Getting to be the first to achieve the longest line of sight on Earth has always been a great challenge for us. It is one of the best recognitions for our work, but things were not always easy.

Here it is how we got there.

It all began in early 2014 when we discovered that the longest line of sight on Earth by that time was a picture of Denali peak from Mt. Sanford, it United States of America. Getting further was something believed as impossible, but after some investigation it turned out possible, but extremely difficult.

At 365 km. away, it was somewhat close to our longest pictures by that time, so the challenge started to become real and we started to look for the perfect opportunity for us to beat it.

Pre – record pictures at more than 250 km. away: a reason to believe a new Record was possible

We are lucky to live near the Golfe du Lion, as it gathers some of the very particular conditions that allow very long lines of sight: 2 high mountain ranges (Pyrenees and Alps) next to a flat (sea level) terrain. The view runs unblocked from one range to the other, covering distances of more than 400 km.

As seen from the Eastern summits of the Pyrenees, the Alpes Maritimes are a thin line above the Mediterranean sea, ranging from 300 to more than 400 km. away. 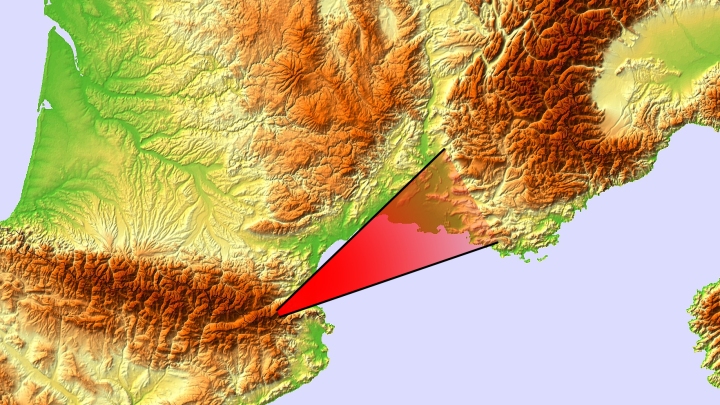 Potential views from Eastern Pyrenees to Alpes-Maritines and further peaks

Very fast we realized that this situation was a clear opportunity, and we started to look for the best line of sight for our purposes. And, of course, for the best meteorological conditions to achieve it.

By that time, our thoughts were that this great distances were only possible using some additional help. In this line, Marc found that some peaks in the horizon were in line with the rising sun, so now the problem was to know exactly when and where to look.

We started an intensive investigation and by Summer 2014 we had already developed some tools to predict the exact timing and position of the sun.

Bringing together the horizon simulation and the sun’s position was all we needed to plan our next adventure:

This process brought us to the summit of Pic du Canigó: we had calculated that the sun will rise behind Tête de l’Estrop by 06:15:11 am.

After a long way up during the night, we arrive to the summit just minutes before sunrise, at 06:00 am.

Great refraction on that morning made the sun to be a little to the left, rising behind the closer Tête de Chabriere. The view was incredible and we were able to capture the farthest picture on Earth by that time, and as well gather important information to fine tune our tool for the next adventures.

A new World Record was achieved and we were very happy to start this race again and to have a succesful first attempt on the Alps.

The base was set, the tools were ready and there was still a lot of potential around Golfe du Lion to be unveiled.

We were still thinking that the Sun was the only way to capture this ultra-distant summits. Our experience proved that only under exceptional conditions these mountains will be visible under direct sunlight.

But now we jump directly to 2015, a year of great progress.

A little bit further: the morning of Saturday 3rd January, 2015.

We are in the summit of Pic de Bastiments, in the Spanish Pyrenees, looking NE. The horizon is looking clear and perfectly blue, while some tiny white dots are just above it. Moments of doubt and uncertainty came shortly after, but the picture is taken. 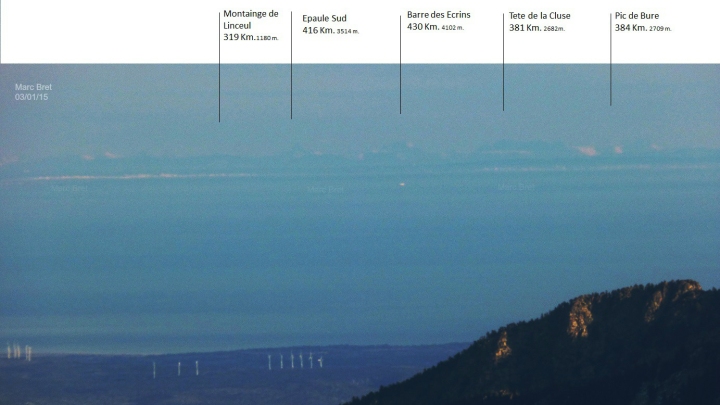 Here they are, the silhouettes of the Alps at complete daylight. Many times before we have reviewed this profiles and now there is no doubt that we have them. And at a whopping 430 kilometers.

This extreme picture may be the first of its kind, the first record of the Alps from the Pyrenees during daylight. Several conditions need to be met for this to happen, making this picture a trully unique report. And it also set a new mark in the World Record of distant photography.

The picture was stored until better conditions were met so the view will be clearer. In the meantime the sun continued its way around the horizon and after a year since the first Alps picture, it was time to capture them again at sunrise.

Imagine you capture the sun rising exactly at the horizon during a whole year.

And imagine you do so starting on the 21st of December (Winter Solstice).

Then, you will see that it moves from East to North (reaching the Northernmost part of the trip exactly on the Summer Solstice, 21st of June) and then back to East.

This means that for a defined point in the horizon, if the sun crosses it once, it will happen twice in the same year: in 2014 we captured the sun rising behind the Alps in July, in 2015 we wanted to do so in May.

And we, of course, wanted to increase the distance. If in 2014 we reached 381 kilometers, that time the target was 388 kilometers.

For this reason, we decided to go for a different set of mountains against the sun. These ones will be a little farther and also, luckily, much more photogenic.

So there we are, top of Canigó, one year later. The sky is not that clear but we just need to see the sun rising just above the horizon line. Hours of trekking and effort evaluated in just some seconds.

And it happened, just exactly as we had forecasted it.

This is one of the farthest sunrises that can be captured from Pic du Canigó, so we were happy for this achievement.

Now our eyes turned back to the daylight picture from January 2015: if it was really possible to capture the Alps during daytime, then we can go a little bit further (again).

In perfect daylight: the clear morning of February 21st, 2016.

Getting the aid from the Sun to achieve the longest lines of sight ever imagined was an achievement we really fought hard for, and also something really cool to be shown… But it can be improved.

On early 2015 some sights were also recorded… But it can be improved.

So now we go to early 2016, when cold airmasses and powerful high pressure systems provide the perfect (once in a year) conditions for a very long sight, if they happen.

Snowed chain of the Alps perfectly seen during daylight at more than 400 km. away

One more thing: as you can see the farthest peak from here is called Doigt de Dieu, or “Finger of God”. Always an interesting topic to see how this names (usually provided by people on the area around the peak) can become somewhat significant when taken in the context of distant sight photography.

We are now almos at the end fo the story, always thinking that its not possible to go further, but always trying to find the next location.

The farthest picture ever taken on Earth was recorded without the direct help of the sun and during Summer in North Hemisphere, a combination worth thinking and something that took everyone (and also us) by surprise.

This is, however, why we got here. Distant photography has a very important part relaying in forecast, analysis and investigation. But it always has a part that is unpredictable.

The thoughts in your mind while you are climbing the mountain analyzed for days that makes you think, “Will it be possible?”, “Am I right?”. I guess this is the real point on doing what be do.

We deal with the known, but the final achievement is always depending on the unknown.

This is the end of the line… until now. 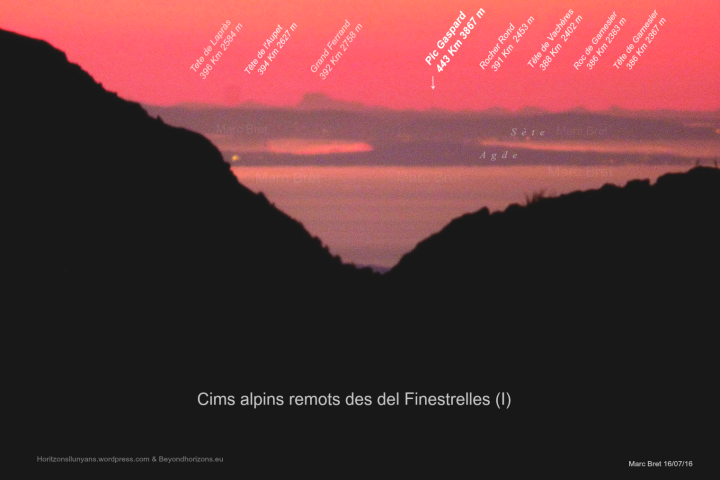